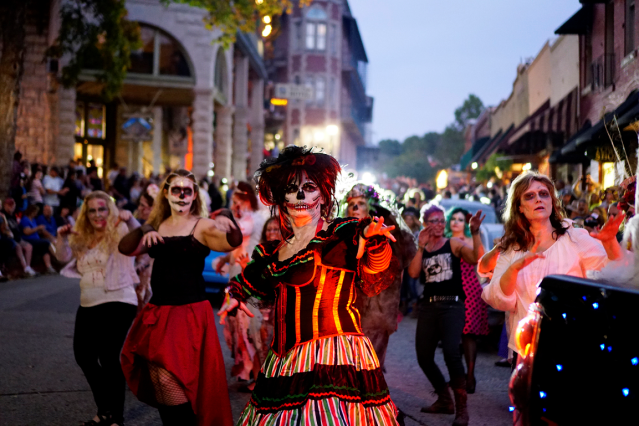 “[The events are] a little more on the sophisticated side,” says Sean-Paul, creator of Intrigue Theater, a Vaudeville-era show of magic and mystery. “It’s ghost tours and haunted shows, not just a bunch of dark rooms with people jumping out at you.”

Illusionist Sean-Paul and Medium Juliane Fay, through their show Intrigue Theater, take guests back in time for a Victorian, turn-of-the-century experience in traditional mentalist performances like seen in the movies The Illusionist and The Prestige. “We always strive to portray that era,” Sean-Paul explains.

Eureka Springs naturally represents it too with the finest Victorian architecture and haunted history, making it a backdrop hailed straight from the Victorian/Edwardian golden era of ghost stories and spiritualism.

So this October, start with a stay or visit to America’s Most Haunted Hotel, the Crescent Hotel, built in 1886 and perched on a hilltop overlooking the town. Here you’ll find the popular Crescent ghost tour, which starts at the top floor of the building and works its way down to the basement, where you’ll find the morgue of the notorious Dr. Baker from the building’s years as a cancer hospital. The autopsy table is still there. Famous spirits at the Crescent include Michael, the Irish stonemason who fell to his death while building the hotel in 1885; Theodora, the cancer patient of the Dr. Baker who seems to need help finding her room key; and a mystery patient in a white nightgown who appears at the foot of your bed in the luxury suites. These tours are scheduled nightly in October from 6 p.m. to 10 p.m., and until 11 p.m. on Oct. 31. Tours are about 75 minutes in length. Buy tickets at http://www.AmericasMostHauntedHotel.com.

Visitors to The Halloween City can also enjoy Basin Spirit Tours at Basin Park Hotel in the heart of downtown. These tours are given at 8 p.m. Tuesday through Saturday with an additional 6 p.m. tour on Fridays and Saturdays throughout October. This guided ghost hunt starts on the roof of the eight-story hotel and proceeds in stages to an underground cave. It ends with a chilling ghost story told by candlelight, plus a sample of spirits of a different kind for those 21 years of age and older. For more information, visit http://www.SpiritsOfTheBasin.com.

Leaning away from ghosts and floating orbs (take your camera) that are sometimes purported to be seen on the haunted hotel tours are the historical experiences of Voices of the Silent City and Haunted Eureka Springs Ghost Tours. In the former, costumed Eureka Springs residents play the roles of some of the citizens of the town now buried in the cemetery, where the living history presentations take place. Voices of the Silent City takes place from 5:30 p.m. to 8:30 p.m. on Oct. 19, 20, 21, 27 and 28. The Haunted Eureka tours involve both a shuttle bus and some walking to explore more of the town’s haunted locations. It takes places every night of October. Sign up for the 7 p.m. or 8 p.m. tour.

Other fun options include The Downtown Underground tours, Escape Room 13, and Flickering Tales.

Three shows are offered that will give you goose bumps. ANNA: a haunting theatrical experience, set at Crowe Manor in the 1940s, takes place at Melonlight Theater. Buy tickets at http://www.Melonlight.com. Not Really a Door, a two-woman play performed at the Crescent Hotel, is a supernatural comedy-thriller. Purchase tickets at http://www.ReserveEureka.com/attractions/notreallyadoor. Intrigue Theater, features The Illusionist Sean-Paul and the Ghost Talker Juliane Fay with a series of thrilling paranormal experiments. Tickets available at http://www.IntrigueTheater.com.

“Our Intrigue Theatre show will be the regular show through the month of October but using some Halloween segments within it,” Sean-Paul explains. A special Intrigue Theatre show on Oct. 28 will include a witch trial hanging for Juliane. But Sean-Paul says he will have a noose around his neck too. After all, the duo is in it “til death do us part.”

Since Halloween is on a Tuesday this year, The Halloween City has designated Saturday, Oct. 28 for the big night of fun. In addition to the annual Intrigue Theatre Halloween show at the Eureka Springs Auditorium, there will be a Zombie crawl (parade) at 6 p.m. followed by a Thriller Flash Mob Dance and a costume party at Upstairs at the Grotto.

But actual Halloween night on the 31st still has a special feature. Sean-Paul and Juliane will hold a séance during a three-course dinner at The Crescent Hotel. Sean-Paul says there will be paranormal experiments between entrees and a final one after dinner. Seating is for about 75 people.

Details and ticket information for all of the events can be found at http://www.TheHalloweenCity.com.

“We’re also going to have a house decorating contest for the month of October so that will make the city come alive even more so,” adds Sean-Paul.

Organizers of this Halloween fun intend to grow the month-long event in future years. “We have a zombie parade this year. Next year, we may have a witch weekend and parade,” says Sean-Paul. “It’s our goal that people don’t think about us just that one weekend in October. They can come and have a great Halloween experience all month. We have so much inherent Halloween stuff.”

Additionally, he says it’s a beautiful time to be in Eureka Springs and the Ozarks Mountains because of the great weather and fall foliage. For more information on things to do and places to stay, visit http://www.EurekaSprings.org.

This entry was posted in Uncategorized. Bookmark the permalink.